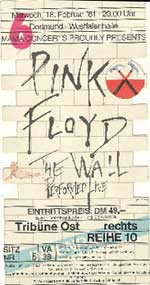 We are indebted to John Davies for allowing A Fleeting Glimpse exclusive use of his photos. Pictures of this particular show have been pretty hard to come by, so this is a special treat. All pictures are copyright John Davies and are part of the John Davies Collection. They may not be duplicated.

Andy Roberts replaced Snowy White in the ‘Surrogate Band’ on the 13 February and remained in the line up for the rest of the tour.