The contributor and photographer (Ian O Morrison) of these well preserved pictures attended this Pink Floyd concert in 1971. The show was held at the so called ‘Pill Centre’ which is in fact the building that houses the University Health Centre at Edinburgh University. The show was organised at the last minute by a friend of Ian’s named Jim Fisher.

Also at the concert was Richard R Brown who said the set list consisted of Echoes, Atom Heart Mother, One Of These Days and others. He said that “it was a crackin’ gig, especially for Floyd fans. It was barely publicized. There were still tickets left on the afternoon of the show! ”

The actual date of this concert has been in dispute for some years, but we think we can now say with some authority it was 19th May 1971 and not 2 June as originally thought. It seems that Pink Floyd were due to make an appearance at the Caledonian Cinema in Edinburgh on 19th May (as shown in many books) but for some reason this didn’t go ahead. Instead the venue was changed to the Student Health Centre Refectory at Edinburgh University (The Pill Centre) Our thanks go to Glenn Povey for his assistance. (Glenn Povey is author of the amazing Echoes: The Complete History of Pink Floyd)

Some years after we first published this display, Glenn Povey located a ticket for the show that is conclusive proof that the show was on 19 May 1971. So that puts this little mystery to bed for once and for all. 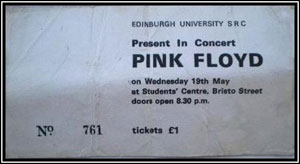