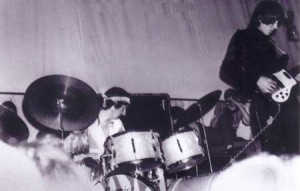 The following set of photos were provided by our good friend Hilco Arendshorts. Hilco informs us that these photos were taken on 23 May 1968 at the Paradiso Amsterdam Holland. There were two shows played by Pink Floyd that day. If you look under Roger’s right arm in the picture on the left, you can probably make out a guy with a camera taking even more pictures. It’s thought that the set list consisted of Let there Be More Light / Interstella Overdrive/ Set The Controls For The Heart Of The Sun / A Saucerful Of Secrets/ *Keep Smiling People. (*aka CWTAE) All pictures on this page were taken by Esther & Hilco Arendshorts and are copyright Hilco Arendshorst. They are taken (with permission) from an AMAZING collection of Rock photo’s that were at classicrockphotos.nl (Since closed)