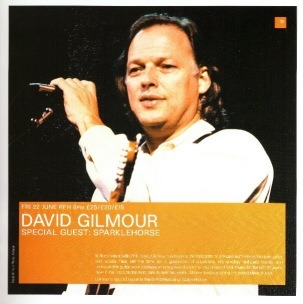 Thanks to Simon Wimpenny for the pics.

The show opened with Sparklehorse playing for about ½ an hour. I thought they were gonna be in David Gilmours band but they weren’t. After a short break Gilmour appeared on stage in a very relaxed outfit. I don’t know how long the Gilmour show went on for but I figure it must have been some 70-80 minutes or so. I must admit that I wrote the setlist down before the concert while looking over the soundboard guys shoulders, I was very surprised with the setlist :o) The acoustics in the hall were very good indeed.

He opened the concert with “Shine on you crazy diamond (Pts.1-5)” standing alone on stage with his acoustic guitar. He started making all kinds of notes where you would get small hints of what was to come, when the crowd reckognized it as “Shine on you crazy diamond” they cheered and clapped. What a way to start :o) He was joined in pt. 5 by Dick Parry doing the saxophone. I was very very impressed by this version of it, I think it was perfect to have Dick Parry come in and end it with him. The guitar work was fantastic.

Next up was “Terrapin”, also acoustic. He did it great and far better than anyone I’ve heard trying to copy this song. It didn’t sound like Syd and it was not supposed to do so I believe.

He moved on playing “Fat old sun” on stage alone and still armed only with his acoustic :o). It was very very beautiful, it took me all the way back to 1970 I can tell you :o) What was a bit of a downer for me though was the fact that I kept thinking to myself “Wow he’s gonna do the solo on his acoustic” but he just ended the song very nice and slow.

In came a choir of 7 girls and 2 guys and the rest of the band, why I mention the choir first is that they did a great job on the next song which was “Coming back to life”. It was a very fresh version having the first part of it being done only with Gilmour’s guitar and voice along with the choir, as it moved on all of the rest of the band joined in. For those of you that like post Waters Floyd, this was a far better version than on the Divison bell tour with Gilmour doing the solo on his acoustic.

“High hopes” was one of the highlights this evening, very beautifully done with Caroline Dale on cello who did a fantastic job and Michael Kamen :o) on grandpiano. It was amazing. The ending solo was done on a very small electric guitar having Gilmour sitting on a barstool with this little thing in his lap sliding beautiful notes out of it. :o) :o) :o)……………..

He then did a french thing I’ve never heard of before, something called “Je croix entendre encore” by Bizet so I was told by the guys at the soundboard.

The next is that Gilmour said “This is a new song I’ve wrote so if you’re bootlegging start your machines now”. He played a song called “Smile” which to me was very anonymous and not Floyd like in any way really. A very low sounding tune.

They then did “Wish you were here” which was very good. It was nice to hear it in a more acousticlike invironment such as all of the concert tonight was.

“Comfortably Numb” was next, and opened with a very distinctive voice speaking the lyrics more than singing it. On the left side (our left) of the stage stands Robert Wyatt. It sounded like he had a hard time getting the lyrics out but he did a great job even so. The tune was done still in a very acoustic version only to be ended with Gilmour picking up his electric for the ending solo which was not a massive extended one but a nice short version. It worked very very well for me.

“The dimming of the day” by Richard Thompson was played which was a very haunting song. It had a very nice feeling to it.

The band then did “Shine on you crazy diamond (Pts. 6, 7 & a bit from 9)” which had an amazing part 6 in it with fabulous guitar worka and percussion. Dick Parry once again appeared for the ending having the band leaving the stage while Dick played the last notes on his saxophone.

The encore opened with “A great day for freedom” and ended with a song called “Hushaby mountain” from childrens movie “Chitty chitty bang bang”.

He did a very nice acoustic solo on “A great day for freedom” and the choir was very good to, “Hushaby mountain” was just a pretty way to say farewell I should think.

All in all it was a very nice concert, it had me cheering like crazy just about all the way through. I got my ticket signed by Dick Parry before the show. The venue had great acoustics, it was nice to go to a show with only so few people, it must have had a crowd of aproximately 2500 people. It was also very nice to not having all the lights and lazers there, the lights where very neutral.

I guess that you could refer to the concert as being some sort of an unplugged show. David Gilmour appeared very lively making funny responds to peoples remarks between songs like when someone cried “When’s the next Floyd album gonna come out ?” David just paused and said “Who gives a f*ck”. Some one shouted “Bring on Roger Waters” and he responded “If you want him …. you can have him” which had ½ the crowd laughing. Before the encore someone asks for “Something from Animals please” and Gilmour goes “We’d still be here after turf-out time if we did that”.

If I was to choose from a post Waters pink Floyd show and this show I would definately choose this again. I think that David Gilmour finally delivered a concert with guts, something that I’ve always thought he lacked from the last two tours he’s been on with the Floyd.

David Gilmour – Guitars and vocals
Michael Kamen – Grandpiano and clarinet
Dick Parry – Saxophone
Caroline Dale – Cello
Robert Wyatt – Vocals on Comfortably numb
The percussionist, guitarplayer, floorbass and all of the choir (except for Sam Brown) I was unable to recognise.