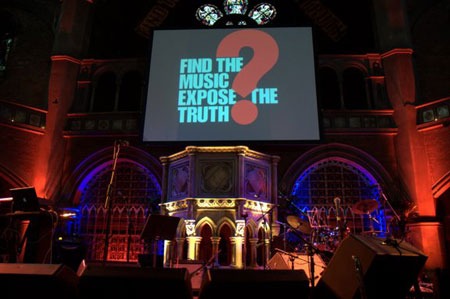 So once again David Gilmour is treading the boards in support of the UK homeless charity Crisis. As I’m sure you know, DG has a soft spot for Crisis and donated the proceeds of the sale of his London home to them a fe w years back – the small matter of £3.4 Million.

This time it’s a series of hidden gigs under the slogan Find the Music, Expose the Truth and the gimmick is that the organisers will text the location to the audience members on the day to simulate the uncertainty of the homeless person not knowing where they will sleep that night. In the end the need to avoid much audience disgruntlement means they bottle out and email the location a couple of day s beforehand, but the point is made nonetheless. 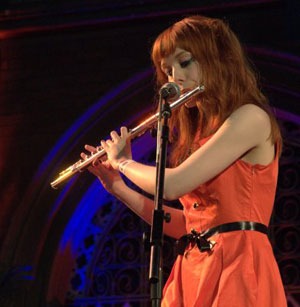 As befits a show of this nature, the bill is eclectic. First up is Catherine A.D. and her minimalist band of guitarist and keyboards, support by Mr Macintosh IV her trusty laptop, “for all those times when I don’t hav e enough arms”. Her music has a haunting, ethereal quality that is emphasise d by her rich alto voice. In some ways she is standard issue weird chick (think Little Boots, PJ Harvey etc.) but whilst the set consists almost entirely of slow, thoughtful songs there is enough of interest, especially the range of fab guitar efftects. It’s an accomplished set that finishes o n a high with a real foot-tapper – Carry Your Heart I think it was called. I don’t see her setting the world alight but she probably has the potential for a great career as one of those quirky niche artists that inspries a small, but very dedicated following.

Next up was Stefan & Paul. Or it could have been Stephan & Paul. Whicheve r it was they were on the bill because of their connections to Crisis rather than any great musical merit. The band’s eponymous heroes had both escaped homelessness and had formed the group at an arts venture set up by Crisis. Their set got off to a poor start as they struggled to get any sound out of the lead guitar. It was fixed after a few minutes and then the fun really started. Some of the guitar work was interesting and indeed reminiscent of he Floyd sound in the early 70s but it was mostly forgettable stuff. Vocally they were poor, especaily the guest vocalist wheeled out for one song. They also lacked stage craft and hung around between songs. An odd choice and I would rather have heard more Catherine A.D. 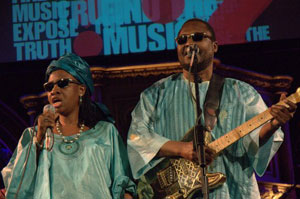 After the briefest of intervals it was on to the main attraction. Amadou & Mariam are a blind duo from Mali, purveyors of uplifting Afro-pop with jangly guitars and a strong rock beat. They both sing and Amadou plays the most amazing gold-plated Telecaster. In their brightly coloured robes and cool shades, they are a striking pair. Their band included the compulsory bloke with giant bongo (strapped around his neck) and a more conventional backline of bass and drums, both of whom were European rather than African. Oh, and a certain David Gilmour providing incidental guitars. 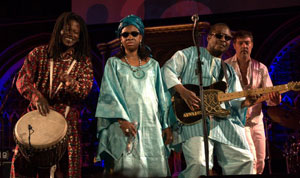 The word is that they had met at an awards ceremony and after expressing a mutual appreciation for each others music agreed on some sort of a collaboration. The whole set was one long love-in: the band were clearly very excited to have DG on stage and Dave seemed to be enjoying every minute. His contributions were generally quite low in the mix but he was given plenty o f solos and an experienced Floyd listener would have spotted some trademark licks. There was a snatch from the Comfy Numb solo, the run up from the Money solo and the briefest of glimpses of the break from Time, but generally he stuck to picking chords and the occasional small, decorative lick. The highlight for the many Floyd/Gilmour fans in the audience was No Way from DG’s first solo album. A&M’s manager announced that they were long time fans and wanted to pay tribute to Dave by doing a song of his. 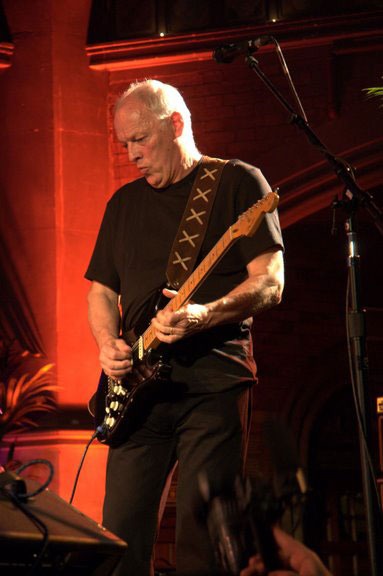 It was an interesting rendition and the look on Dave’s face at the end suggested h e was glad to get through it unscathed! That was it as far as familiar material was concerned: the remainder of the 10 or so songs was all A&M material, either in French or what I assume was the local tongue. Many of the songs included extended jams and the bass player and bong player would routinely amble across the stage to jam with Dave. The songs are generally upbeat and uplifting and it was a really enjoyable 75 mins, although it’s fair to say that it’s probably not to everyone’s taste. All in all, an interesting night for a good cause with some great music. 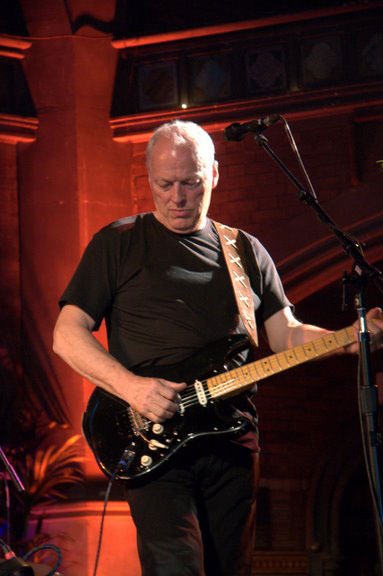 As luck would have it I happened to be on the second row. I also picked up a goodie bag which contained the latest A&M album ‘Welcome to Mali’, an A&M t-shirt and the four disc version of live in Gdansk. Bargain!

All images are thanks to and copyright John Davies. Review with thanks to Andy Saltiel.