After Atom Heart Mother I had limited opportunities to feature on any Floyd recordings. Being banned from the studio didn’t help in that regard. But on The Wall and Meddle I did get tiny gigs. Very tiny. In fact barely audible, but I’m there.

On The Wall I was cleaning up and doing stuff around the studio one night after everyone had gone home. The phone rang, and it was Carolyne Waters wanting to speak to Roger. I told her I thought he’d already left, but politely went to double-check for her.

I went into the studio, and sure enough Roger was there. So I called out “Roger, Carolyne’s on the phone.” He turned around, rather annoyed, because I’d caught him in the middle of putting something down on tape. Actually he looked like he’d been sprung doing something sneaky. He was speaking very secretively into a microphone. This was a surprise to me, because I thought all the recording for The Wall was finished.

He went and answered the phone, then went home. I thought he’d want to re-do what he was recording, but he didn’t bother. Thus my voice made it fleetingly onto The Wall. Albeit backwards.

Previous to this, my other vocal contribution came in the soccer crowd at the end of Fearless. 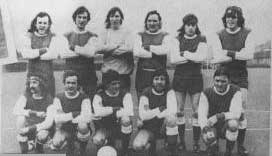 I had picked up the Floyd guys on the morning of a Liverpool game and I noticed they were all wearing red tops. I was wearing a blue one, but that didn’t really matter because I wasn’t actually going to be seeing the game. I was just going to drop the guys there and wait out in the car park.

We got to the game, and as the four Floyds were making their way through the car park, Nick spotted this rather snazzy Porsche. He got talking to the guy who owned it, and next thing we knew he was off, taking it for a test-drive!

Suddenly there was one extra ticket. Rather than give it to me, Roger tried to palm it off to anybody he could find. A hot dog salesman, a Hare Krishna, a drunk in a gutter, a guide dog, even an old lady being put into an ambulance. But Rick and Dave took the ticket off him, came back to the van and offered it to me. I thought, it’s not Aussie Rules football, but it’s football. So what the hey!

We entered the stadium and made our way through the crowd to our seats, Roger with a tape recorder in his bag, and me in my blue top copping nasty looks from the sea of red supporters.

This cheesed me off a fair bit. Back in Australia the crowds at Aussie Rules games were so much more easy going. All the aggression took place on the field. Here it was the other way round. Here the players tiptoed around on the field, careful not to touch an opponent for fear they’d crash to the ground in a screaming heap and get carted off on a stretcher. ( Not that it mattered anyway, because they always seemed to make a miraculous recovery once they reached the sidelines.) Meanwhile up in the stands throngs of round-faced, brain-dead morons with no necks and very loud voices bayed for blood, alcohol and fireworks.

Sorry, I’m getting off the track aren’t I. This isn’t about football. This is about….. what’s it about? Oh yes, that’s right, Fearless.

The game was played, and, oh goody, Liverpool won. Ninety seven to sixty five. No, hang on, it was one to nil. So I copped a right-royal pasting from the red supporters. Idiots! I couldn’t have made it any more obvious that I didn’t give two hoots who won or lost. But the more I tried to look disinterested, the more they thought I was just cracking the sads! 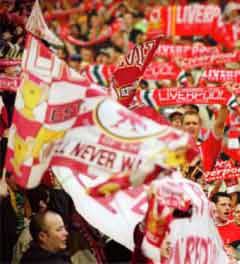 Then they started singing You’ll Never Walk Alone, and I thought, I can’t take this stupidity any longer. I have to do something! I think Roger, Dave and Rick sensed something was about to give. I was facing off with the crowd and the cogs in my brain must’ve been clicking over rather loudly. The three of them obviously decided discretion was the better part of valour ( their red tops wouldn’t be enough to shield them from the blows about to be rained down upon their blue-clad acquaintance ) and began moving though the crowd in the other direction.

As the song ended I yelled out E-VER-TON. If you listen closely, I mean reeeeeal closely you can just pick it up. Immediately after You’ll Never Walk Alone ends there’s a “yaaaayy!” Right there you can hear a lone voice. That’s me. It’s so hard to hear because the Floyd guys had high-tailed it out of there by that stage. The next “yaaaayy” from the crowd was in response to me getting my head punched in. Then they countered my E-VER-TON with a series of increasingly rapid LI-VER-POOLs.

I eventually managed to exit the stadium minus my now-shredded blue top. Thankfully I had the van keys, or I’m certain the guys would’ve taken off without me. They were waiting at the van with Nick, who’d just got back from his spin in the Porsche. They were all having a good laugh, the story having been relayed to Nick. Well, Dave, Rick and Nick were. Roger stood there shaking his head and saying, “We simply cannot take you anywhere, can we!”

He was cut with me once again. Nothing unusual about that. But I do take some pride in the fact that I inspired his classic line “Fearlessly the idiot faced the crowd”.