It was during the making of Atom Heart Mother that the personalities within the band really started coming to the fore. 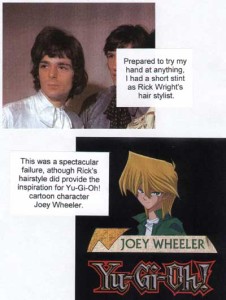 Roger seemed to be taking charge, or at least taking things upon himself, and would get pretty serious. That’s not a criticism. This was a time when things were getting serious, success-wise, and he just wanted to make sure the band were going to cash in. He was determined they weren’t going to blow it after all the hard work they’d put in.

It’s just that….and I’ll admit that this is my problem, when I see people start to take themselves seriously I’m overcome by irresistible urges to take the mickey out of them!

David Gilmour was just as the pictures of him would indicate; cool. One really cool guy. But he certainly knew what he wanted, especially musically, hence my dumping from Fat Old Sun. And he tolerated me to a large extent because I think he enjoyed seeing me get on Roger’s nerves.

Nick, I think, mostly felt sorry for me. He understood the misfortune of someone ending up as a drummer. But at least he was a successful one. The most applause I’d ever got while drumming was when I was hit by that coin as my brother and I were busking.

But Nick was into cars, a subject I found as interesting as snorkelling in the Sahara. 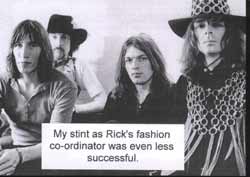 I did learn a few things about cars while I was trying to sell them, but before that all I ever knew was where the petrol went, and where the water went, and where the oil went. ( In my car’s case, the oil went on the driveway.) Even there, I don’t think I ever recovered from the ridicule I suffered when I was first shown how to top up the oil in a car. My brother pulled out the dipstick and I peered down at the slim pipe where the dipstick went and said, “How are you supposed to pour the oil down that little hole?”

Anyhow, while I knew that Nick and I didn’t have all that much in common, we did share the same sense of humour to some extent. He was capable of quite waggish behaviour at times, and he seemed to appreciate my gags more often than not.

Rick Wright. Well, he’s just a lovely guy. I suppose if there was anyone in the band who should’ve been nasty to me it was Rick. When I think back, man! I’d have these ideas about what he could wear, or how he could have his hair done, or how I could help him with his keyboard programming. He was just too nice to say no. ( Most of the time he really should’ve said “No way, idiot. Rack off!” )

I suppose with Rick, often he was trying to make me feel better after I’d been blasted for doing something stupid. He was very caring. Always one to ask “How are you? How do you feel?”

I remember one time in particular. It was the middle of winter, I’d stuffed something up and was feeling pretty miserable. I started thinking of home. In Australia it would’ve been hot and sunny, and here I was stuck in England trying to pay off debts. Rick saw me gazing glumly out the window and asked what I was thinking. I said, “Right now my friends are lying in the sun. I wish that I was there.”

After Pink Floyd gave me the flick it was Rick who kept in contact with me.