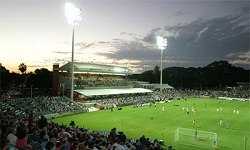 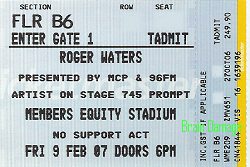 What a night, this is one that I will remember for the rest of my life, Roger Waters live, standing only 100 feet in front of me, the only thing between us; a married couple that somehow managed to talk through the whole show. 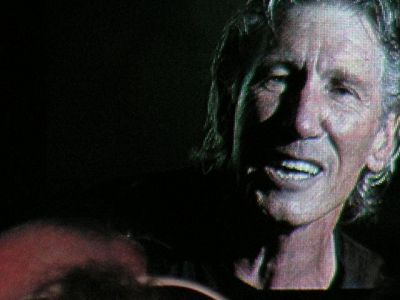 The weather was perfect and the sound was absolutely unbelievable, never have I heard such clear, defined sound at that level before.

Roger seemed to be enjoying himself, there were surprisingly no cricket jokes (England had just won the first final) like at previous concerts. 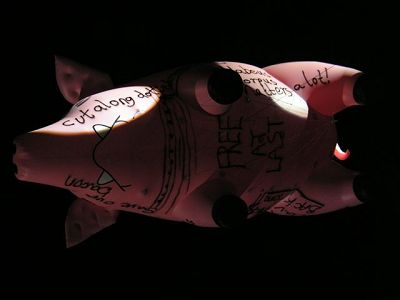 The highlights for me were ‘Have a Cigar’, ‘Perfect Sense’, ‘Fletcher Memorial’ and ‘Bring the Boys Back Home’. The tracklist was exactly the same as the previous concerts, of course though, I would have loved to have seen more of Rog’s solo stuff and much more from ‘The Final Cut’, for this, I’ll have to wait until next time (please let there be a ‘next time’). 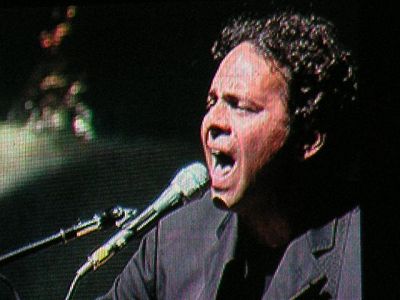 The only gripe I have (and it had absolutely nothing to do with the band) was that during ‘Us and Them’ a local racetrack let off 15 minutes of fireworks which totally messed with my head.

The pig was great, the astronaut was a bit ‘meh’ and the giant TV screen really added to the feel of the music, I couldn’t imagine this concert without it.

Roger, thank you, this is one night that myself, my brother, my dad and my best mate will never forget. 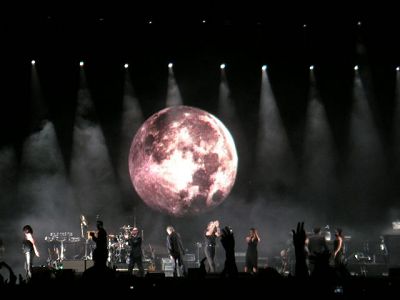 Just returned from The Members Equity Stadium in Perth WA. What a concert: the sound was superb, the band fantastic.

Particularly loved Carole Kenyon with Great Gig in the Sky – she sounded as good as Claire Torry on the original cut and with Harry Waters doing Rick Wright’s piano it was incredible.

Other highlights Perfect Sense and also the finale with Another Brick and Comfortably Numb. But really the whole concert was superb and transported you back in time.

The downside was a group in front of us who wanted to dance throughout the Dark Side of the Moon . They obscured the clouds and also everyone else’s view. Also, everyone spent most of their time queuing for drinks and missed half the concert; after all guys and gals you can get a drink anytime but you can’t see Roger Waters.

Thank you Roger – a great concert, a true gentleman, and superb showman.

CONCERT REVIEW – by BD contributer, Mike Duguid (who also supplied the picture below)

Saw Roger and the band perform in Perth last night (Feb 9th) and I am still on a high 24 hours later, No drugs or alcahol required, I am sure that was the greatest show on earth.

My wife and I were 4 rows from the stage and every cent we paid was worth it. One of my greatest dreams since buying the In the Flesh dvd a few years ago and being a Floyd fan for over 30 years was to see Roger in concert and he and the band certainly didn’t let me down. 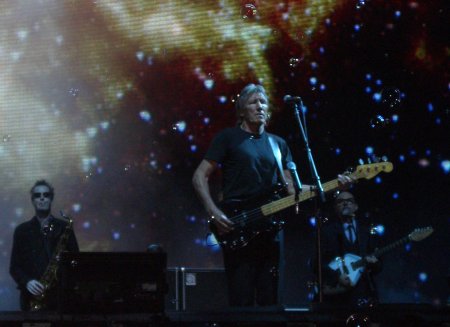 My wife came along for the experience and reckons it was better than Robbie Williams show which she loved last year.

Thanks again Roger and PLEASE come back.

Well for a newbie to the Roger Waters/Pink Floyd touring club it was a pretty amazing night!  I’ve been to many gigs but this will easily be rated as my best.  When I heard he’d been visiting Perth I was eternally grateful and couldn’t believe my luck, -thanks Roger for coming to Perth, – I hope we made you welcome.

I had a pretty good idea of the set list beforehand from BD but this made absolutely no difference to the impact, -amazing! Sitting in the floor region the sounds were good (the surround thing going on was cool!) and the lights, pyros and pig awesome. I had no idea the pig would be released and watching it float around and then away during Sheep was one of my favourite moments.  Having said that it was a closely followed by the change from ‘Have a cigar’ to ‘Wish you were here’ which was breath takingly good and brought on several ‘wows’ from those around me.  The second act for Dark Side of the Moon was faithfully reproduced flowing seamlessly with the visuals and little extra sound bytes a real joy to appreciate.  After a well deserved break the encore was fairly balanced with another 4 tunes ending perfectly with Comfortably Numb, -wow that took me back to the first I heard it!

No bad points really apart from the sardine feel and getting to know the person next to you a little too well during the gig.  Small issues really as once it had begun I was sucked in and had forgotten it all!  To me it was obvious this wasn’t a thrown together gig and plenty of effort and organization had gone together to make a real treat for the fans.  I guess I would’ve loved it to have gone on with more solo tracks but where do you stop…!  Being the young pup I am I’ve not had a realistic chance until now to see Roger and I have no complaints in the slightest!

The venue itself was pretty good and I had no big issues with getting about etc.  Writing this the next day I’m still awestruck and finding it hard to believe it’s over but for me that was a great slice of 3 hours!  Its something I’ll be talking about to anyone that will listen for a long time again, -hopefully next time Roger comes to town!

Nine months ago I migrated to Perth Western Australia with her in doors to catch some sun and work, coupled with the knowledge that I would never see anyone from my beloved Floyd live ever again. No one ever comes to Perth because we are so isolated. But the gods of all things musical conspired to send me Roger Waters RESULT!!!!!!!!

It was almost hard to believe I was getting the chance to see the Floyd legend again. I had the pleasure of seeing Roger in Manchester on the 22nd of June 2002 in the M.E.N Arena. That was a fantastic night Roger played a blinding set and sent us all home to Scotland with a huge smile’s on our faces.

The Anticipation was great for the Perth show and Roger never let us down. All your previous reviews have been spot on. What a fantastic show which left us all satisfied baying for more. Ok there was the odd little quirk but that’s what live music is all about. Two of the highlights of the night for me were “set controls for the heart of the sun” the images on the big screen along with the music were fantastic. It’s was good to see all the guys together and happy. Secondly the release of the pig into the Perth night sky never to be seen again. I wonder if they called air traffic control to pre warn them? Rest assured I will be setting out to track the pig down in the bush first thing tomorrow.

I won’t do a review of the gig as all has been said before, instead I would like to tell you where Pink Floyd – Roger Waters fit into to my existence. It was twenty three years ago when I was ten years old, a heavily sedated older friend was playing some tunes “Pink Floyd the Wall”, to be more exact, Eins, zwei, drei!! What the hell was this!! I had never heard music like this before having grown up in a family full of women who like shit like ABBA. The old man drowned when I three so I never had the male influence what ever difference that makes, I am sure some physiologist could spit our some crap to tell you who and what I am.

I got on with life like we all do, I grew up with the Floyd throughout my entire childhood the music was there every step of the way. Sounds a bit fucked up but that’s the way it is. I am a decent person they were there when my nuts dropped, when I got my first woman and every other major event in my life. So here is to all things Pink Floyd we know who we are and while we have these guys still willing to entertain us thank god for there beautiful music, long live PINK FLOYD & ROGER WATERS….